Defending the environmental defenders in the Global South 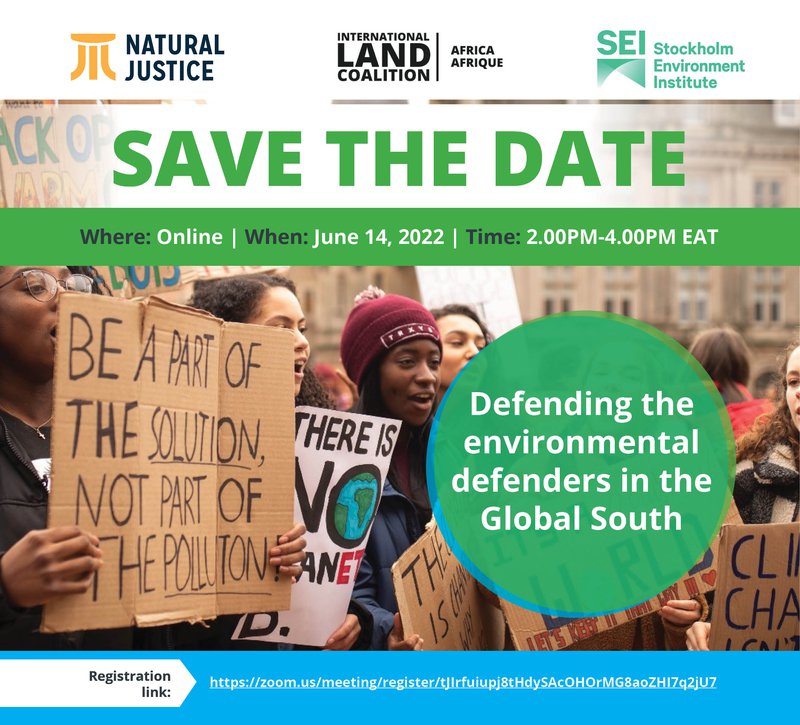 This event, hosted by the Stockholm Environment Institute and the International Land Coalition (ILC) Africa, focuses on the increasingly challenging and worrying trend of threats, harassment, and murder of environmental defenders in the Global South (Latin America, Asia and Africa)

According to a report released by Global Witness in September 2021, 227 land and environmental activists were murdered in 2020 for defending their land and the planet. That was the highest number ever recorded for a second consecutive year. As the report says, with the deepening climate crisis, forest fires rampaging across swathes of the planet, drought destroying farmland, and floods leaving thousands of people dead, the situation for frontline communities and defenders of the earth is getting worse.

The event aims, therefore, to provide space for sharing of experiences on the current situation in the Global South and explore some of the measures (political, legal, financial and institutional) that are needed to defend the environmental defenders in the Global South.

The event comes under the umbrella of the Leadership Dialogues and will contribute to the outcome of Stockholm+50 by yielding clear and concrete recommendations and messages for action at all levels. They aim to mobilize the global community behind strengthened cooperation and accelerated innovative action. Each of the three Leadership Dialogues will be presided over by two Co-Chairs— one from a developing country and one from a developed country—that are appointed by the two Presidents of the international meeting.

All relevant stakeholders, including women, youth, older persons, persons with disabilities, Indigenous Peoples and local communities have been invited to contribute to the discussions to build momentum for a healthy planet for the prosperity of all. Find out about the Informal Working Groups that were established for each of the three dialogues to guide the work leading up to the international meeting. The event will focus on expanding the leadership dialogues by dealing with the issue of justice, inclusion and intergenerational equity.

It will specifically focus on the following aspects:

1. The sharing of experiences on the situation of the Environmental defenders in the Global South, especially the youth and women who are most vulnerable as defenders;

2. Highlight ongoing measures and protection mechanisms in place, and what is needed to address the situation of environmental defenders; and

3. Identify actions by governments, the international community (including the United Nations agencies), civil society and the research community in responding to and protecting environmental defenders under international law.